The untimely death of a cousin brought my extended family together for a graveside service. After the closing prayer, I walked across the cemetery grass to say hello to my Grandmother. In a wheelchair beside her, was the Pastor of her church, Reverend E.M. Replogle. Reverend Replogle began pastoring the Gospel Lighthouse, a small Pentecostal Church in West Fresno, Ca, in 1950. He was in the final years of his ministry, and while his body was frail, he was strong in spirit.

As I approached, Grandma smiled and introduced me. “Brother Replogle”, she said. “I want you to meet my “Pastor” grandson. This is Danny Hoover, Geneva’s boy”. Although I wasn’t a Pastor at the time, Grandma liked to introduce me that way. Her words proved to be prophetic, and I have little doubt that my praying Grandmother had a lot to do with my coming to Christ, and time in ministry.

Brother Replogle extended his hand, looked me in the eye, and said, “Son, whatever you do, make sure you go to the hospitals and pray for the sick, and go to the rest homes and visit the elderly. If you do, you will never forget what’s important in ministry”.

As a Christian, it’s easy to lose perspective. To set our eyes on things of this earth, and not on things above. Not bad things necessarily, but things that in the light of eternity, are of little or no importance. As I mentioned in a previous blog, death has a way of quickly rearranging our priorities, and reminding us of what is truly valuable, but it’s the time between tragedies that we tend to wander.

Politicians are frequently criticized for not knowing the price of a gallon of milk, not pumping their own gas in years, or keeping up with the latest technology. Once in office, they can become insulated from the day to day struggles of those they represent. I’m sure it’s not their intent, but nevertheless, it can happen. And if it does, the level of trust with their constituents can be greatly diminished.

As Christians, it can happen to us too. We can get so caught up in trying to “live the Christian life”, we stop seeing those around us who are suffering. Those who may be fighting cancer, going through a divorce, or grieving the loss of a loved one. Perhaps some who are experiencing a great deal of stress due to finances, the loss of a job, or health issues.

When we become desensitized to the needs of others, we will feel sorry for people, instead of feeling their sorrow. One requires only thought, the other provokes action.

Grandma always told me (with a smirk), that I shouldn’t attend a large church, because according to her, God didn’t go there either. My Christian roots are in the small church on the corner. The one with wooden pews and overhead transparencies, where you tell Bible stories on flannel boards, and collect the offering in wicker baskets.  A place where your first name is preceded by “Brother”, or “Sister”. A place like Gospel Lighthouse in West Fresno, Ca.

And you can learn a lot form a man like Brother E.M. Replogle. A man who probably never had a congregation over 200, (if he had, Grandma might have gone elsewhere), but whose ministry probably touched more lives than he ever knew. A man who was faithful to the church he pastored for 48 years, who at the time of his death, was the oldest active Pastor in the Pentecostal Church of God in the world. A man who began his ministry in 1933, and continued until his death in 1998. A man who on that day, gave me the best advice I never took.

And I wish I had. 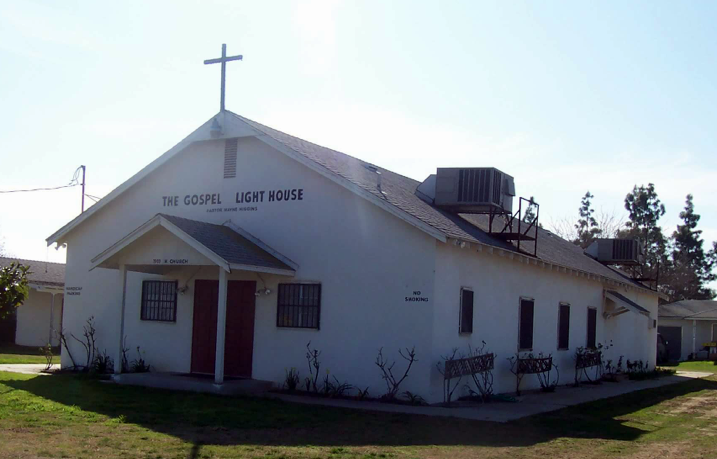 This is the Gospel Lighthouse in West Fresno, Ca. The church that Grandma took me to every Easter until I was 12 years old. I was one of the last of my cousins to talk my way out of “going to church” with Grandma on Easter, and by the time I had to provide an excuse, she’d heard them all. I believe I relied on the old “I don’t have anything to wear” line, but that didn’t go over very well.

As much as I acted like I didn’t want to go, I do have fond memories of this church. My favorite was “The Penny March”, when all of the children would move out of the pews and “march” to Sunday School while the Congregation sang “When the Saints Go Marching In”. Grandma would place a few pennies in your hand so you could drop them in the offering plate on the way out. And you knew if you didn’t drop them , you’d probably meet Jesus before she did!

Hearing a song can instantly take us back to a specific moment in time. The one I’ve shared below puts me here. Third wooden pew from the front.

The God of Second Chances?

Two Roads by the River